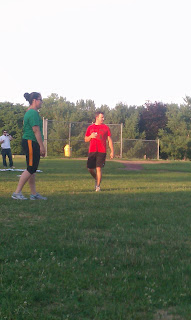 It was a close match on August 2nd between Union Inn Freaks and My Couch Pulls Out But I Don't! Unfortunately, it was the UI Freaks that pulled out this game and let the "Couch" stay in for a 5-4 win. Check out Stacey (not Stacey's mom) above getting ready to kick that ball where the sun doesn't shine!

Okay, I don't have an iPhone, but I am now very familiar with the App as a result of a little weekend bridal shopping with my friend, Val. Our power hours of shopping quickly came to an end when Val's iPhone came up missing after a trip to Macy's. As I now think about the manpower enlisted to find this phone it is comical even though I'm sure Val thought it was anything but comical at the time. Let me put things in perspective for you! The ingenious find my iPhone app said the phone was in Macy's! (Okay, it didn't say it was in Macy's but it was obvious from the GPS tracking signal it was in Macy's). I think this is pretty cool. Unfortunately, before we could access the app we had to get somewhere with Internet access. The logical thought was Verizon, Val's service provider. The sales associate looked at her like she had three heads when she asked him if there was anyway he could help her track or shut down her phone. Next step, the Apple Store. Great-it's in Macy's. Do you think this is where the story ends? Funny! We've got a lot more man power yet to be involved in this missing phone mystery. We go to Macy's retrace our steps and it's nowhere to be found. We ask the cashier, the lost and found, the makeup counters. It's MIA and no one has seen it. Next stop the "pleasant" Crossgates customer service representatives which were representing nothing more than nastiness. Maybe it's on the move (the App will tell you this) so we go to Sprint and the sales associate is so nice he walks with us and his iPhone in search of the phone. Still no luck so he leaves us to try the Guilderland Police. Yes, the police were involved (plus, both their iPhones and the office computer), plus the Macy's Security woman (the hero of the day), plus some little old man presumably waiting for his little old lady. Where was the phone found? In the apron of the MAC cosmetics chick! She was holding it so no one stole it. She apparently had "held it" for close to two hours without thinking that maybe she should turn into the lost of found.

There a couple takeaways from this experience: 1)Download the "Find my iPhone (or Android) App" and 2)The Guilderland Police (at the least the two that helped us) are awesome.

WHAT IS YOUR FAVORITE APP? LEAVE ME A COMMENT AND LET ME KNOW!